Grandmaster Arthur A. DeBuc 9th Dan
“Thanks to all my students for getting me such a beautiful belt.
This belt will always be close to my heart
as I think of you all.”

These Masters are also on the Board of Directors
and will act in part or together in approving and or directing the DDIWGKO
on by behalf when I am not present.
Hanshi DeBuc

New students are taken by invitation only.

If you have been invited to join us see bottom of page for next step
your white belt class starts will start when you are accepted.

Inducted into the:
INTERNATIONAL HALL OF FAME

WORLD HEAD OF FAMILY
SOKESHIP COUNCIL
The world’s most elite martial arts grandmasters council
Inducted into the:
National Register’s
WHO’S WHO
In Executives and Professionals 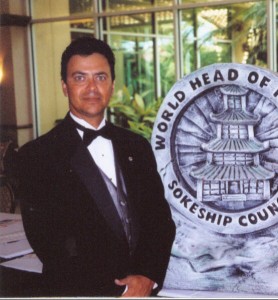 Kyoshi DeBuc as a 5th Dan
picture taken in Florida at the:

Various Martial Arts Belt’s
and accreditations that belong to Hanshi DeBuc
Below story is as accurate as Hanshi can make it please feel free to contact us if you can find an error:

Hanshi first started to train in Kyokyshin at the Y.M.C.A.
in Kingston Jamaica in 1970.
he was 13 years old.

Hanshi trained under Sensei Mike Arnspiger in Miami Florida. from around 1978 to 1981
and earned a Brown Belt with a black stripe,
making Hanshi eligible to take the Cuong-Nhu black belt test.
Circumstance with time off  and responsibilities stopped Hanshi from getting to the Black Belt exam.
Later that year Cung-Nhu added another black stripes to their
brown belt in order to allow a student to sit the black belt exam.
Hanshi was never able to take the Cuong-Nhu black belt test even though he paid the school dues for an additional two years without training there.
(Hanshi has said his training in Coung-Nhu is the reason Double Dragon Goju-Ryu works so well.)

Hanshi trained under Kyoshi Russ Rogg around 1990 in Perine Florida and earned a Purple Belt in Shendo Goju-Ryu,  Kyoshi Russ Rogg had started his own Goju-Ryu style and was also at one time the student of Grandmaster Manny Saavedras.

Hanshi trained under Grandmaster Manny Saavedra in Miami Florida from around 1992 to 2009 in Sansei Goju-Ryu, attaining his 8th dan in 2003.

In 2004 Hanshi started working again on combining his martial arts knowledge into one art. Hanshi had been quietly working on this combination since 1973. His thoughts were that all martial arts are somehow connected and he wanted to put them back together again. Using Japanese Goju-Ryu as its foundation and Miyagi Sensei and Master Ngo-Dong as his inspiration, both of whom had many years earlier created Goju-Ryu Karate  and Cuong-Nhu Oriental Martial Arts from combining other martial art systems, Grandmaster DeBuc put the final touches on his style, and named it: Double Dragon Goju-Ryu Karate-do.
Hanshi DeBuc took his 9th dan in January 2014 when he officially left Sansai Goju-Ryu and  decided to teaching his own style of  martial arts
as his
teachers before him had also done.

and so the birth of:
Double Dragon Goju-Ryu Karate-do.